[ permalink ] [ e-mail me ] [ ]
Every once in a while, I get it in my head that I have to search for something obscure on the Internet. Recently I was telling my kids about my first computers -- an Atari 400 with a membrane keyboard, followed by an Atari 800 with a real keyboard -- and how we couldn't download games from the Internet, but we had cartridges and cassette tapes and subscriptions to computer magazines that had BASIC source code you could type in yourself. I'm sure the kids were enthralled by my stories.

The first game I ever remember typing in from a magazine was one where you had to fly a bat across the screen in a cave, avoiding stalactites and stalagmites as you went. Later on I thought, "I bet I could find that if I looked hard enough", and the quest was on.

All I have to say is: thank goodness for the Internet Wayback Machine. It's been crawling and archiving sites on the Internet since 1996, including (as it turns out) the Classic Computer Magazine Archive. Inside the December 1982 issue of Antic magazine was the game I was looking for... BATS!

Next stop was finding an Atari emulator. There was a surprising variety to choose from. I loaded up Atari800Win Plus in a Windows VM and downloaded the BASIC file for the "Bats" game (luckily I didn't have to retype the game, I only had to download -- I love living in the future). After figuring out the virtual drives and virtual joystick controls, I was ready to go: 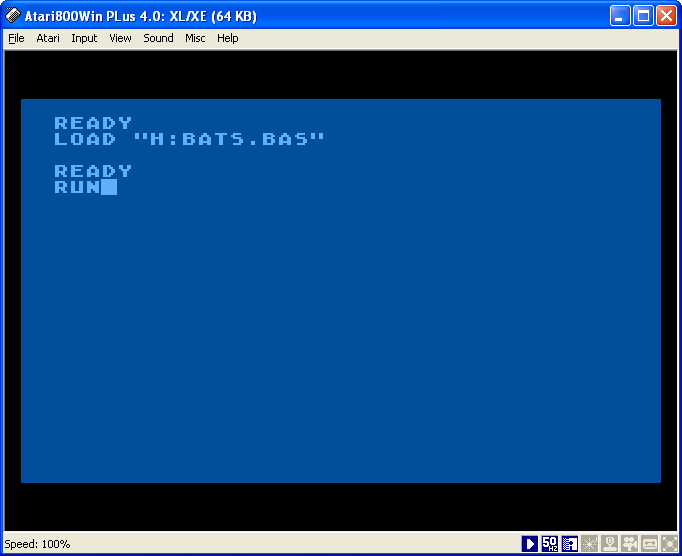 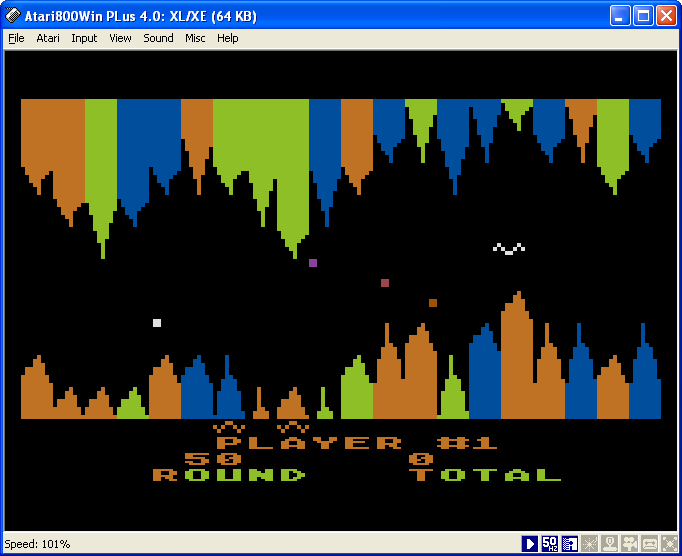 That was fun for a few minutes anyway, as nostalgia always is. According to the magazine article, the author of the program (Stan Ockers) released it into the public domain, so if you're curious as to what the BASIC file for such a game looks like I converted it to text as BATS.BAS.txt for your viewing pleasure.

The BASIC-to-text conversion was an interesting process, as I had to map a virtual printer to Notepad in the Atari emulator. Kids today... they don't realize how easy they have it with their ASCII and their Unicode and whatnot...

[ permalink ] [ e-mail me ] [ ]
Since it's been about two and a half years since I've posted a list of my Clippings articles, I thought it might be time for an update:

If you're not subscribed to the monthly newsletter, here's a link to the LotusUserGroup Clippings Page so you can take a look and sign up. If you're more interested in the admin side of things, don't forget that Warren Elsmore and I trade off duties writing articles (he writes on the odd months, I write on the even ones).

[ permalink ] [ e-mail me ] [ ]
Of the 15 physical devices currently active (i.e. -- in regular use) on my home network, only one is a Windows machine. The majority of devices are made by Apple, although there are also 2 Wii's, 2 DSi's, and an Android phone in the mix. Every single device works flawlessly with my wireless router except the Windows machine. Windows XP always worked (and still works) fine, but Vista and Win7 just can't seem to stay on the network.

Recently, the Windows laptop went from "problems every week or so" to "can't even stay connected long enough to check email". I did a full virus scan, removed and re-added the wireless network a bunch of times, disabled and re-enabled the wireless network adapter, and turned many wireless adapter settings on and off. On the router, I could see constant streams of DHCP discovers and offers for the laptop, but somehow it wouldn't connect or stay connected. I even took the drastic measure of replacing the firmware on my router with DD-WRT -- everything that worked before continued to work, the Windows machine continued to be flaky.

Here's what I did to finally get it working. I don't know if one of these things was a magic step or not, but this is what worked:

2. Disable Receive Window Auto-Tuning: this ended up being a 2-step process, because first I had to disable Windows "scaling heuristics", and then disable the auto-tuning. And then reboot, just for good measure.

3. Set a static IP address: no matter how much I played with DHCP broadcast flags, I still had issues getting and keeping a reliable connection, so I finally gave up and set a static IP address and used Google DNS for name resolution. Interestingly, DD-WRT is configured by default with a setting called "DHCP-Authoritative" turned on, which will prevent non-DHCP clients from accessing the network; so I had to turn that off at the router.

You would think that setting the wireless channel or static IP address was what actually fixed it, but I had done that before and still had problems, so I think something about the first two steps was also important. For reference, the commands I had to issue (at a command prompt in Administrator mode) to do #1 and #2 were:

I hope this helps someone out there... or at least helps me next time I have to troubleshoot this.