[ permalink ] [ e-mail me ] [ ]
I upgraded my demo laptop to 8.0.1 yesterday. That's the old Thinkpad I bring with me to conferences -- no private data or confidential files, and I don't care how beat up it gets. Since I use it for presentations, I also have some of the fonts cranked up pretty big so everything is easy to see from the back of the room.

However, after I loaded up Notes 8.0.1 the tab fonts were a bit large even for my taste:

All I could think of was Tiny Elvis: Damn, look at those fonts. Those things are HUGE! (That's right, E! Score another one for the Tiny E!)

Luckily, someone else (one Janko Stefancic) already had the problem and posted the fix on the LDD forums -- adjust your Windows Messagebox font. No telling how much time that saved me. The Messagebox font setting is one of the "Advanced" options in the Appearance tab of the Windows Display Properties:

A font size of 10 worked okay for me, although 9 is probably better on a "normal" machine.

As seen on Paul Mooney's site (and several others), registration for ILUG is on. If you don't register now, you may well miss your chance. I already bought airline tickets hoping that Rob McDonagh and I get to do a session -- I'll be there in any case. Even if my session is refused and my registration doesn't get accepted, I'll be there lurking in the nearby bars.

On a related note, here's a screenshot of the ILUG 2008 event page on Facebook (available to those of you who haven't dropped off of Facebook yet). I thought the sponsored ad choice on the left was rather interesting -- not sure what keywords caused that one to pop up. 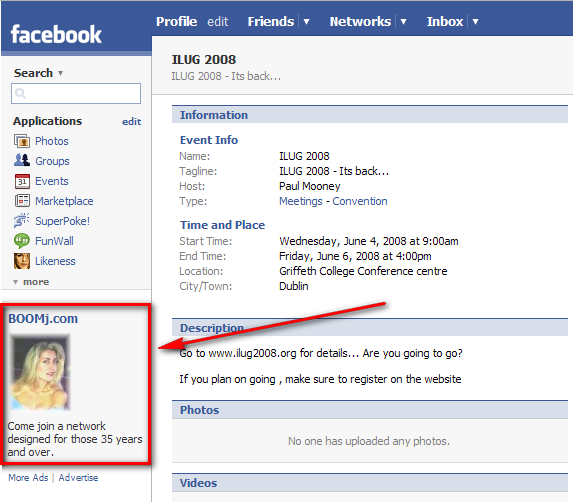 [ permalink ] [ e-mail me ] [ ]
Okay, I suck at taking pictures. Coupled with the fact that (A) I didn't bring a real camera to Lotusphere so all I had was my iPhone, and (B) I deleted all my people pictures because they were blurry, this means that I have no good pictures of Lotusphere last month. Thank the Lord for Flickr (and other people's pictures).

However, as a purging exercise, here are the Lotusphere 2008 pictures I was able to salvage from my iPhone. It's a miserable collection.

See, I told you it's a crappy set of pictures. And those are the ones I didn't delete.

[ permalink ] [ e-mail me ] [ ]
I'll say it again: it's easy to get something working on my machine. It's much more difficult to get it working on your machine. Especially if you speak a different language and are in a different locale.

Jesper Kiaer and Dietrich Willing were having some problems getting the Java Chart examples in the ChartTest database working. They were both having locale issues. I fixed the problems in the database and reposted it (so you'll need to re-download if you got it before around noon today), but here's what was going on:

So again, please re-download the database if you were an early adopter and you downloaded yesterday, so you have the latest code. Until the next bug fix, of course...

N.B. Ińtërnâtiônŕlizćtiřn is the "word" that Sam Ruby suggests using to test for character set issues.

[ permalink ] [ e-mail me ] [ ]
There's probably no point in apologizing, but I'll do it anyway: sorry it took so long to get this out.

There, now that that's out of the way... The sample database that Captain Rob McDonagh and I used for our Lotusphere session BP210: Reports, Charts, and Graphs in IBM Lotus Notes is finally available for download:

We tried very hard to put some good information in there about how everything works, so please read the help docs and look at the code (with comments!) before you ask questions. This database should work on Notes 7 and Notes 8, and possibly on 5 and 6 but we didn't test those versions explicitly.

And, as always, I was amazed at how long it took to clean everything up for public consumption (and I'm sure there was more cleaning that could have been done). There's a big difference between getting something ready for demo (Works on My Machine!) and getting it ready for other people to use it. Hours and hours of difference.

It's also possible that additional hours will be spent writing a few entries in the coming weeks about how some of this stuff works. We'll see.